I had completely forgotten about this and after telling the entire story to my dear friend – who thought it was very interesting —  I thought it might be good Cocktails at Seven material. 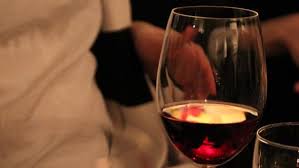 I met a BFF for coffee and chats at The Little Tart (behind Six Feet Under on Memorial Drive — if you’ve never been then GO!!!).  After an incredible latte, people watching, magazine reading, chit chats, scrumptious nibbling on some great quiche and tarts — we decided to meander over to Historic Oakland Cemetery.  One of my very favorite places in downtown Atlanta.  I know I know — are you furrowing your brow thinking ‘my word she’s odd’.  Well let me assure you upfront — I’m completely off the beaten path so to speak.  :::he he he::::

I’ve always loved historic cemeteries and Oakland in particular.  Years ago I worked for Mayor Shirley Franklin.  During lunch, I would meander down to Oakland and pick a nice shady spot on a grave and read for lunch.  It was so peaceful and recharged me for the rest of the day.  It’s very park-like which Victorian cemeteries were meant to be, so that you would sit down and stay for a while.  Of course in my over-active imagination, I would pretend all the deceased were peeking over the old brick wall surrounding Oakland yelling ‘Here she comes!! I bet she sits on my grave today!’.  Call me an 8 year old.  It is what it is.

As we leisurely strolled through the sunny rosemary filled pathways of the cemetery that day, I recalled a first and last date I had years ago.  I was still working for Mayor Franklin at the time.  It was a blind date a friend of a friend.  He had recently unfortunately lost his wife.  I asked my friend was he even ready to step back into the dating pond and she assured me YES.   I was skeptical and for good reason.   But she urged me on – saying he was a super nice guy, very bright and I would enjoy meeting him.  I shrugged, said it was ok to give him my number and didn’t think that much about it.

A few weeks later, I got the call, we talked for a few nights via phone, then set to meet at Houstons by Lenox.   Upon meeting him he looked as if he must have surely lost  much weight due to the fact his suit swallowed him the poor dear.  He seemed very nervous which made me question immediately my friends statement of ‘he’s ready’.   I felt so very sorry for him.  He ended up talking the entire time about his newly deceased wife (within the last 6 months), everything from her cancer treatments, to how he brushed her hair, to how they met, to almost every intimate detail I felt I didn’t want to know.  But I sat and nodded letting him know I was listening.  I ordered another glass of wine to help facilitate the rest of the date.  He was lonely. He was hurting.  He desperately missed his wife.  Bless his heart.   After a few hours, I was ready to head home with a call into my friend.

As we stood to leave, he was antsy before me begging to show me something.  I blinked blankly at him not sure what was coming next.  I timidly asked ‘you mean now?’  He fervently shook his head, and said it would mean the world to him to share this with me.  My mind raced as I agreed, I said I would follow him asking the destination.  He said it was a surprise.  :::gulp::::::  WARNING — WARNING WILL ROBINSON — arms flailing::::::

We drove away from Houstons, destination unkown to me — very unsure of what was to happen next and what would be revealed.  I tried to figure out what in the world this poor lost soul wanted so desperately to show me. A complete stranger.  As we neared the Capital and turned towards Oakland Cemetery — I was still very puzzled but happy to see my favorite cemetery.  It was summer so still plenty of light even after dinner.  We parked, groups of people milling around so I wasn’t too very alarmed.  I didn’t get a threatening feeling from him anyway (I have that you know — the gut feelings about people –  it’s that 6th sense).  We walked as he told me she was buried here.  Bing Bing Bing He wanted to share with me where she was buried.  Oh. My. Word.  Intrigued though, because of the cemetery love thing going on, I followed him to her grave site.  A stark white statue of a man and a woman.  He sat looking at her lovingly as he combed her hair.  It was a tribute to his wife.  Forever carved in marble.   Goodness.  To love someone so very much and to lose them.  Painful.  Been there done that myself.

Back to the present moment — as I recounted this story to my bff I had earlier met for coffee — she said after a moment — ‘sort of reminds me of the one you dated who liked to jump into open graves’.  Well now….that’s a whole other ball of wax.  You think?   Ahem. 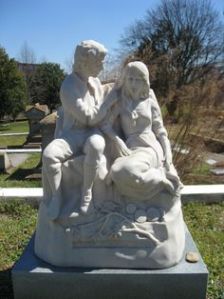