Obituary
There aren’t many 90 year olds with a nickname of ‘Mad Dog’ who can actually fill the shoes of such an epithet. Well, my father did. Born Myrt ‘David’ Kennedy in the year 1924 he was an Atlanta native at that. He was one of 5 children. His sister, Annette Ingram is the last of those five. He grew up riding his bike through the streets of Atlanta when the Great Depression was just beginning to rear its ugly head. At the age of 14, he became sweethearts with the pretty little skinny girl next door who was 12 – his future wife of 55 years.
Daddy was too young and skinny to join the Navy during WWII, so he did what many did at that time and lied about his age. They said he was still too skinny to join and sent him home with a crate of bananas and come back in a week. He made the weight cut (note to self – stay away from bananas). He told Margaret Frances Kittles (the skinny cute girl next door) to wait on him after the war. And off he went. The stories that came out of his time in the Navy are fascinating. Daddy was a feisty little guy which I suppose one had to be in a full-fledged war. He was on many a war ship and one that was hit and sunk. His days of clinging to ship wreck for over a week or more before being rescued (That’s my favorite story by the way— sharks were involved. Depending on which way he actually told the story, many were eaten alive by the sharks, and then some days well – the sharks were at bay– :::::smiling at my dad’s stories::::::). He was a cutie-pie in his Navy uniform. He was quite the handsome pup.
Upon his return home from the war he did indeed find Margaret Frances and they married. My mother was so scared about her wedding night that she took her best friend at the time with her to sleep over. Much to my dad’s surprise when he came to the wedding chamber my mother and her friend were there giggling. Needless to say the friend was sent home. Ahem. They spent a wonderful life together. They Jitterbugged at Grant Park, took car trips to the beach. They were always having dinners with friends and later in life enjoying church groups and trips.
Daddy then joined the Atlanta Police Academy and served for 30 years becoming a much respected detective solving many crimes. He gained his famed nickname of Mad Dog when working on the police force. To this day, I can ask an older police officer who is active, if they remember Mad Dog Kennedy. A smile will come over their face; they shake their head ‘yes’ and say “Oh yes – I remember Mad Dog’. I’ve tried to find out just why he has such a rascally name — and I’m greeted with a knowing silent smile. Maybe I don’t want to know. ::he he he:::::
My father is survived by two adopted daughters, myself Kimberly ‘Kimy’ Kennedy and Pamela Kennedy. I’m the youngest by the way (I love saying that). He has 4 grandchildren, Laura and Andrew Davis, and Amy & Allison Reese. He has many nieces and nephews. A big THANK YOU to Southwest Christian Care for all your love and care for both my parents in their final days.
I was a daddy’s girl. He could build or fix anything. He built the loveliest playhouse for us when we were small. It was beautiful. He flew kites with us, let me sit and help him for hours in his workshop. I’m positive that’s why I love going into Hardware stores because it reminds me so much of my dad when I was a little girl. He was larger than life. He wasn’t perfect by any means but who is. I’m not that’s for sure.
After my mother passed away decades ago – he was very lost but found his way eventually. He became a resident at Christian City after suffering a stroke in his later years. He became quite the ladies’ man having a girlfriend on at least every other floor. He was known to still partake in a feisty battle with another male hence I suppose he very much lived up to the Mad Dog title. He was a rascal and I loved him.
‘Separated by death – forever together in love and memories’. Love you Mad Dog.
Visitation will be held Monday at our chapel from 5-8pm. Funeral Service Tuesday April 8, 2014 at 11:00am in our chapel. Internment Resthaven Cemetery, Decatur, Georgia. In lieu of flowers please make donations to Southwest Christian Care/ Hospice, 7225 Lester Road, Union City, Georgia, 770-969-8354. Please Visit our website to extend condolences atwww.TaraGardenChapel.com 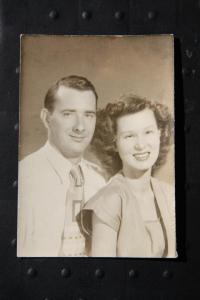 3 thoughts on “I’ll miss you daddy”